This past Saturday, I performed a few jigs and reels with the band Noonday Feast, here in Asheville.

The above video is of the tune Attfield’s Lament, which I posted a few months ago.  This tune picked up another name recently.  Farewell to Prince Rhaegar.

Below you will find a great couple of non traditional but well written tunes called, Waves and Tides and Crow Hill.

Plenty of mandolin/bazouki content here.  These are original compositions by Noonday Feast.

At Celtic Week I noticed a post on the wall by the cafeteria announcing the sale of a 2010 Weber Yellowstone Octave Mandolin for $2740.00, or something close to that. Sounded interesting. Since I had only really ever played my Trinity College Octave Mandolin, or one of Tom Fellenbaum’s (of Acoustic Corner in Black Mountain, NC) I figured I’d like to see what kind of quality you get spending 5 times what I spent, or twice as much as what Tom charges. 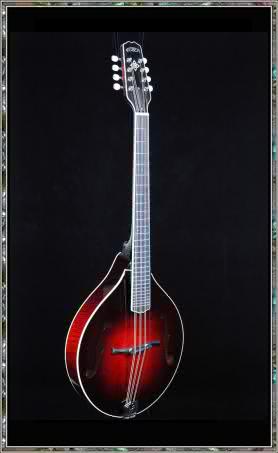 First thing I noticed was that the neck felt like a baseball bat. It was pretty thick and chunky. The strings were at a good height, but I did notice the bridge wasn’t sitting completely flat on the body. (That may have just been a poor setup?)

As you know I’m primarily a flat top player (Although I did play 4 stellar archtop mandos this week. One was a late teens Gibson F-2; another was an early 20’s Gibson F-4; then my roomate had an A and an F Stonebridge. I would’ve bought the F Stonebridge right then if I could’ve.), sometimes archtops sound too tight and compact in their sound to me. This too was the case with this Weber Yellowstone Octave Mandolin. It had nice intense projection, but it certainly did not have a sound I wanted to pay over 2K for. There wasn’t any sweetness to the sound. It was harsh and metallic, too much for my preferences.

It was a beautiful instrument to look at, but I’m still a fan of the wide open smoother sound of my economy Trinity College. (With heavier gauge strings to make it sing like that, of course!)

Today I was inspired to tab out one of my recent favorite tunes.  One is called The Choice Wife, or O’Farrel’s Welcome To Limerick.    The mandolin tablature also has standard notation. You can access these files as .pdf clicking the links below or through the tunes page.

This is a tune played often at the Jack of the Wood session, when Sean is on the pipes. It’s got a great groove, and nice melody.

Here’s a great PDF from a fellow MandolinCafe member, Michael Pilgrim.  Some of these songs are individually on the tunes and tab page, but 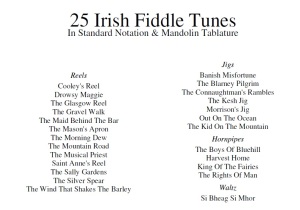 there are a number of them which are not.

Enjoy adding these common irish session tunes to your repertoire.  I look forward to seeing you at the Jack of the Wood some time here in Asheville!

See below for a great book full of Mandolin tab, standard notation and chords for the Celtic/Irish mandolin, octave mandolin or tenor banjo player.

20% of all profits go towards the Swannanoa Gathering Scholarship Fund. 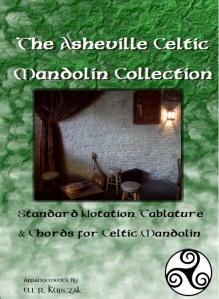