New tabs, tablature, standard notation and chords have been added to the tunes section, both for mandolin and guitar.

As promised, I finally got to tabbing out Peter Byrne’s Fancy and Creeping Docken.  There was also a request for Cup of Tea.  That one’s for you Michel in France!  Joe Cooley’s was just for fun. It goes well before Cup of Tea in a set.

In the Mandolin II class at Celtic week, with David Surette, we learned a few tunes by ear, a few by tab, and also focused on how to make accompaniment with the mandolin interesting. I had to leave “the gathering” earlier today, to visit the in-laws, and so have had some time in the car to tab a few of the tunes for you. Click on the links below for the mandolin tablature for the irish tunes of (reel) Devanney’s Goat, (reel) Poor Old Woman, and (slip jig) Hardiman the fiddler. 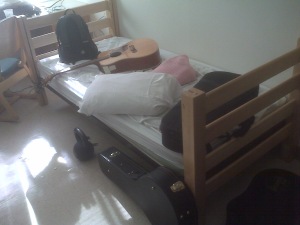 Dorm Room at Celtic Week 2011 - Guitar, Mandolins and Kettlebells, what else do you need?

Now that I’ve found myself exploring the guitar again, I’ve also created flat picking tablature for the tunes above. Here they are:

Hardiman the Fiddler in Standard Tuning

We also learned a great tune called The Reverend Brother’s Jig (called the Monk’s Jig on thesession.org) and a number of Breton Tunes. Great class, good teacher, learned a lot.

I was recently asked to accompany a fiddler using modal keys.  “Interesting”, I thought.  What exactly did he mean by that?  So I asked.  His response follows.

• I refer to “modal”  [A modal] when I’m looking for no V-chords — instead, the flat-VII chord would be the typical second chord [ie: in the key of A, the second chord will always be a G, not an E]. These will hardly EVER have the 3rd of the chord present in the backup; just use open chords, or, in the case of DADGAD, use flavoring pitches such as the 9th, 4th, flat-6, etc. This type of backing is great with pipe tunes of the “Scottish gapped-scale” variety, the melodies of which skip the 3rds altogether [ie: Pipe Major Jim Christie of Wick March].*
*some gapped-scale tunes such as Lexi McAskill, which would normally be considered in A modal, can actually be played in Em modal with an electrifying effect.
• I refer to “minor modal” [Bm modal] when it’s clear that the melody has a flattened-3rd [ie: Congress Reel and Sean Ryan’s Jig use a C naturals]. This doesn’t necessarily mean that I like the backup chords to contain 3rds; I still prefer 3rd-free chords in most cases. The reason I indicate these differences in my charts is so that you know what’s happening in the melody.
• I refer to “mixolydian” [A mix] when it’s clear the melody has a major-3rd. These often sound fine backed up by chords with a major-3rd. But still, use 3rds very sparingly. As a melody player, I like to be able to create the effect of changing from major-to-minor or minor-to-major by changing the tune I’m playing, rather than having the guitarist give the effect away with the chords.
Additional Notes:
As for Dorian, I think of this mode as more relevant to describing the melodic content rather than the specific chord voicing.
The progression  I to flat-VII , as you well know, is the tried-and-true standard for modal tunes. The use of the flat-VI chord [ie: F in the key of Am modal] is fantastic — exactly once. It’s a very powerful effect used near the end of a tune, but if it gets over-used the effect becomes trite.
An example of this is Track 12 of my ******* album, in which ***** used the flat-VI too many times successively and it got boring.
All of the tunes in the Laridee set are minor, and also modal. (That’s not to say that they can’t be re-tooled for cool effects.) The B-parts of several of the tunes go into the sub dominant IV area. [ie: the fourth tune uses Dm modal for the A-part and Bb chords for the B-part.]